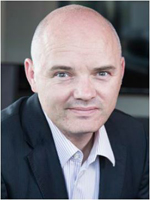 Mr. Jones was President and CEO of the Canada West Foundation from 2012 to 2016. Prior to that, he served in various roles in the federal and Saskatchewan governments, including Deputy Minister of Intergovernmental Affairs for Saskatchewan.

Mr. Jones' academic credentials include degrees from McMaster and the University of British Columbia and a masters degree in law from Oxford. He is a Wesbrook Scholar and is the recipient of many prestigious awards, including the Premier's Award for Excellence (Leadership).