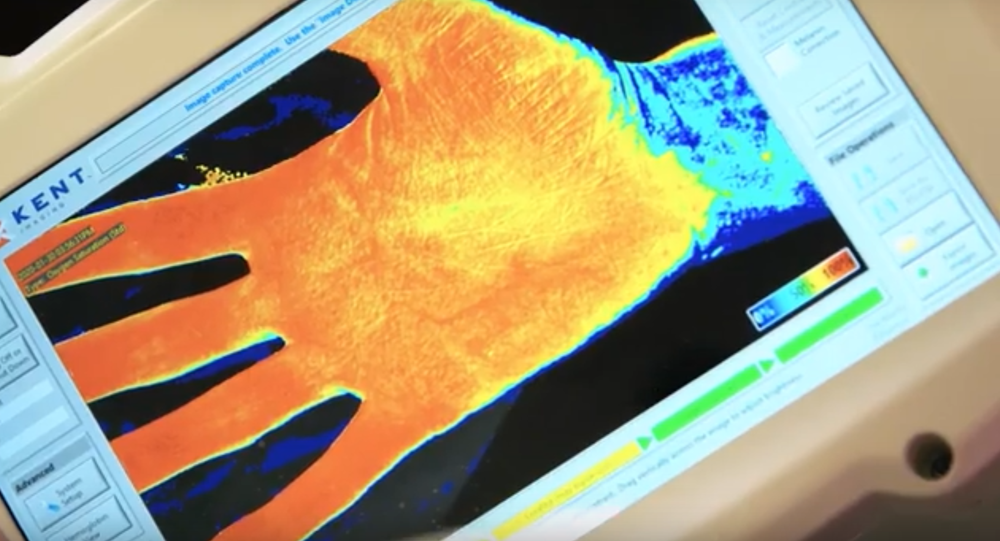 (Music plays. A woman walks into a room, where a glass door with the Kent Imaging company logo on it closes behind her. Voice over by DON CHAPMAN, Executive Chairman of Kent Imaging starts.)

(Video transitions to a view of the medical camera being held by a person off-screen, over the open hand of a second person off-screen. A purple light appears on the hand before a camera flashes. The video then transitions to show the camera display where a photo of a hand converts to a heat map-style image showing healthy oxygen saturation of the hand.)

(Video transitions to a view of DON CHAPMAN in a Kent Imaging office where he describes the technology. “Don Chapman, Executive Chairman, Kent Imaging” appears as text in the video.)

Now what the camera does is it takes multiple images at different wavelengths of light, runs those different levels of information through an algorithm that figures out how much blood and oxygen is being seen by the camera.

(Video clip of a health professional in a medical exam room using the camera with a patient, over the patient’s foot. The camera flashes. “Measures blood and oxygen levels” appears as text in the video. Video clip shows the camera screen display with a heat map image of oxygen saturation of the foot. Camera then transitions back to DON CHAPMAN in a Kent Imaging office.)

Wound care clinicians do not have a lot of tools they can use to aid them in understanding what’s going on in the wound.

(Camera transitions to a view of the camera displayed with its protective carrying case.)

They can do MRIs or CTs. But the problem is that that’s very expensive and it’s something you have to do in a hospital. This is a tool that they can use anywhere. So this gives them insight into the wound that they can’t normally see or tell.

(Video clip of a hand with scarring. “Helps set up regimen of care” appears as text in the video. Video clip shows the same hand with the heat map image of oxygen saturation showing the areas needing further medical attention. The video then shows the pre-treatment heat map side-by-side with a post-treatment heat map of the same hand after it has received care and is healthy.)

And that then helps them set up the proper regiment of care and they can follow up on whether or not it’s working by taking additional pictures in the future and comparing them to what they had already.

(Camera then transitions back to DON CHAPMAN in a Kent Imaging office. “Sales grew significantly” appears as text in the video.)

Kent’s real growth began after the FDA certification in 2017, but through 18 and 19 our sales grew significantly.

(Camera transitions to close up views of the camera, and the commercial name Snapsho2tNIR. “Used throughout U.S. and Canada” appears as text in the video.)

The main market for us at this point is the US but we have them in Canada. They’re in Toronto, Montreal, Hamilton and there’s several all over the place here in Alberta.

And the goal of course is to get it down the road far enough where it becomes more like a stock product that everybody has to have.

(Camera transitions to show the technology.)