Western Economic Diversification Canada (WD) was established in was established in 1987 under the provisions of the Western Economic Diversification Act (1988), and mandated to promote the development and diversification of the economy of Western Canada and to advance the interests of the West in national economic policy, program and project development and implementation. This broad mandate allows the department to implement tailored programs and initiatives to assist western Canadians to create strong, competitive and innovative businesses and communities.

The Minister of Health, supported by the Minister of State (Western Economic Diversification), is responsible for this organization.

The Access to Information Act extends the present laws of Canada to provide all Canadian citizens, permanent residents and corporations present in Canada with a right of access to any record under the control of a government institution that is not of a personal nature. In accordance with the principles that government information should be available to the public, this access to information is balanced against the legitimate need to protect sensitive information and permit effective functioning of government. Necessary exceptions should be limited and specific.

WD is committed to both the spirit and intent of the Access to Information Act, which is based on the principles of open government, to ensure transparency and accountability within the department.

This report describes how WD administered the Act during fiscal year 2014-2015, and fulfills the requirements under Section 72 that every government institution must prepare an annual report on the administration of this Act each fiscal year and ensure it is tabled in Parliament.

WD will publish its Annual Report to Parliament on its public website (www.wd-deo.gc.ca) once it has been tabled in the House of Commons and the Senate.

Administration of the Act

The ATIP Unit is located in Edmonton, Alberta. The unit oversees the administration of the Act, and is part of the Finance and Corporate Management Directorate. The ATIP Coordinator, Deputy ATIP Coordinator, and one full-time ATIP Officer are accountable for the development, coordination and implementation of effective policies, guidelines, systems and procedures to ensure the Minister’s responsibilities under the Act are met, and to enable the monitoring and timely processing, and proper disclosure of information to our clients.

The primary responsibilities of WD’s ATIP Unit include:

Regional ATIP Liaison Officers (RALOs) are located in each of WD’s regional offices and corporate business units. These individuals are the first point of contact and identify the appropriate subject experts, coordinate retrieval of records responding to access requests, and liaise between the ATIP Unit and regional staff concerning enquiries.

The ATIP Unit monitors the processing of all access requests.  The ATIP Coordinator and the department’s Executive Committee, RALOs and Communications officials receive weekly briefing reports pertaining to the status of all active formal and informal access requests and consultations.

The department posts summaries of its closed access to information requests to WD’s public website.  These postings were also hyperlinked to the “Open Government (ATI)” website.

The following information provides additional context to the statistical details found in WD’s 2014-2015 statistical report (Annex B – “Statistical Report on the Access to Information Act”).

Requests Received Pursuant to the Access to Information Act

For the period of April 1, 2014 to March 31, 2015, WD received 13 formal requests for information pursuant to the Access to Information Act. This is lower than average for the department over the last five years, although there was an unprecedented increase in 2013-2014.

The accompanying chart shows the comparison of new of requests received by the department over the past five years.

Text version: 5-Year Comparison of the Number of Requests Received 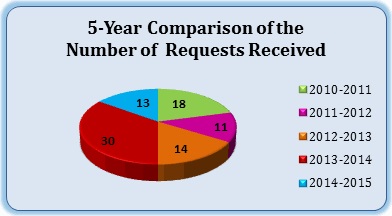 The accompanying chart shows a five-year comparison of sources of access requests to WD. 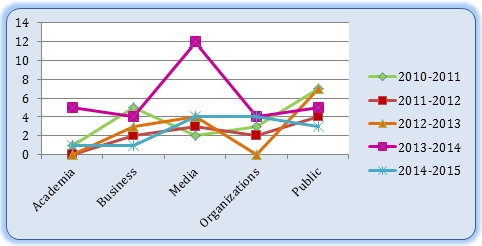 The disposition and completion times of the completed requests are broken as follows:

No application fees or response timelines apply to these informal requests; however, WD responded to all requests in 10 days or less.

Extensions of Time Limits and Consultations

In 2014-2015, WD required extensions due to interference with departmental operations on two requests.  These extensions may be considered if processing the request within 30 days would require the transfer of resources from a business unit to the ATIP office, monopolize a significant portion of the resources of the office of primary interest to the detriment of its core functions, or the request would use such a high proportion of the resources of the ATIP Unit that it would have a significant negative impact on the processing of other requests.

WD also required extensions to complete necessary consultations with other government departments and/or third parties on four requests which were completed within 2014-2015.

Section 19(1) was the most utilized exemption during the reporting period, having been applied to seven requests.  Sections 20(1) and 21(1) were applied to four requests each.

WD received one administrative complaint pursuant to the Access to Information Act in 2014–2015, and while the investigation is ongoing, the department has implemented changes to its internal briefing processes as a result.

There were no audits undertaken or concluded during the reporting period. Further, there were no appeals or applications submitted to the Federal Court.

WD’s cost for administrating the Access to Information Act in 2014-2015 is estimated as follows:

The additional salary-related costs included above are not all captured in the Statistical Report, but provide a more complete picture of the overall cost to the department to administer all aspects of its activities related to the Access to Information Act. 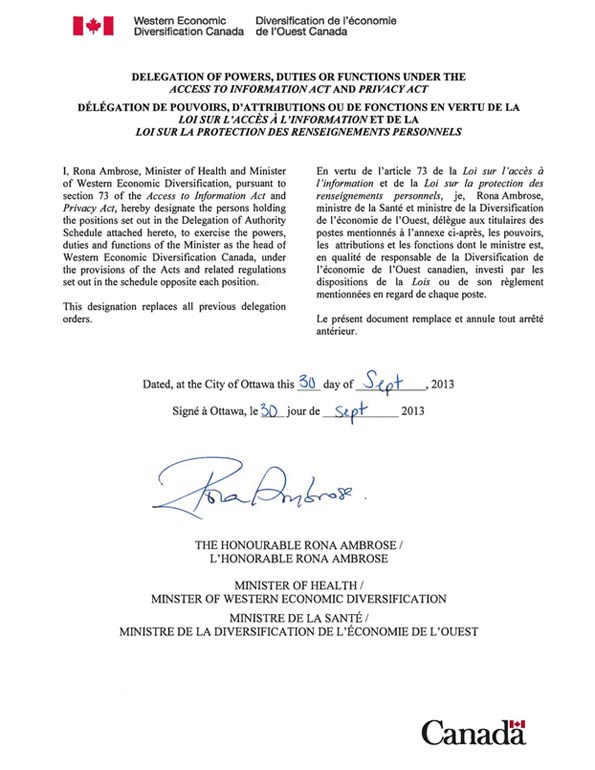 Annex B – Statistical Report on the Access to Information Act

Note: All requests previously recorded as "treated informally" will now be accounted for in this section only.

Part 5: Consultations Received From Other Institutions and Organizations

5.1 Consultations received from other Government of Canada institutions and organizations

5.2 Recommendations and completion time for consultations received from other Government of Canada institutions

Part 9 – Resources related to the Access to Information Act