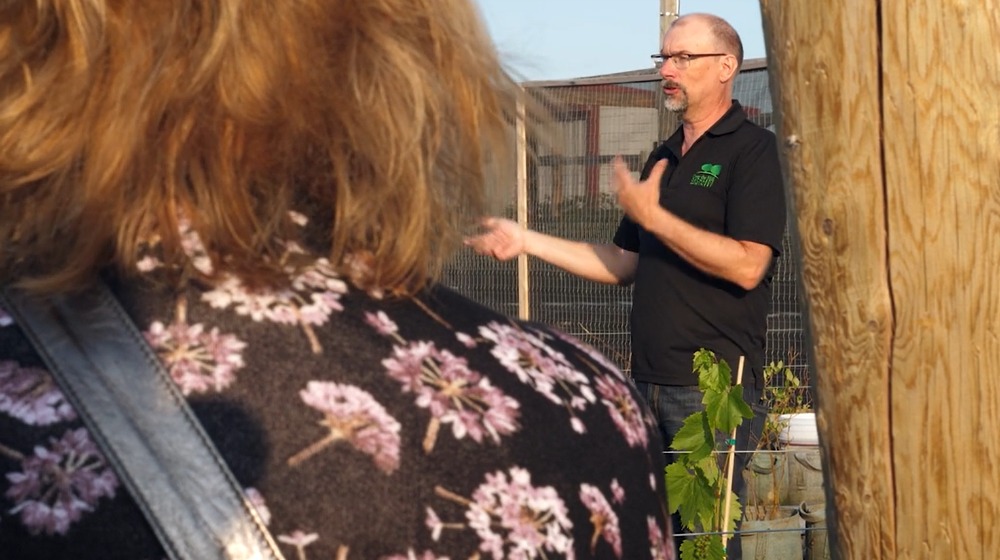 Sylvia and Dean Kreutzer established Over the Hill Orchards and Winery as an organic orchard in 2000 in the Qu’Appelle Valley near Lumsden, Saskatchewan. The fruit grown in the orchard includes specialty Prairie varieties such as saskatoon berries and locally developed cherries, as well as fruits that aren’t typically grown in Saskatchewan like apricots and grapes.

Le Conseil économique et coopératif de la Saskatchewan (CÉCS) worked with Over the Hill to make the orchard and winery the first accredited Économusée ® in Saskatchewan. Started in France, économusées are an international network of artisanal businesses that open their doors to tourists who want to see and experience unique, local products where they are produced. Providing services to visitors in French and English is an important part of being an économusée ®.

(Text on screen: Scenes in this video were produced prior to COVID-19 health restrictions.)

(DEAN KREUTZER – OWNER, OVER THE HILL ORCHARDS) My name is Dean Kreutzer and this is my wife Sylvia Kreutzer. I grew up in Regina. Sylvia grew up in Northern Saskatchewan.

(Various shots of Over the Hill property)

(DEAN KREUTZER – OWNER, OVER THE HILL ORCHARDS voiceover) We started Over the Hill Orchards 20 years ago.  We were living in Regina and moved out to the country here and decided to create an orchard with lots of fruits that typically weren’t grown in Saskatchewan.

(SILVIA KREUTZER – OWNER, OVER THE HILL ORCHARDS voiceover) Hello. My name is Sylvia, from Over the Hill Orchards and Winery. We're here in Lumsden, Saskatchewan. We're an all-organic orchard that was started in 2000. This is an orchard that produces fruit that was really new to Saskatchewan.

(STÉPHANE RÉMILLARD – MANAGER, ENTREPRENEURIAL DEVELOPMENT, CÉCS) My name is Stéphane Rémillard. I am the Manager of the entrepreneurial section, entrepreneurial development at the CÉCS. The CÉCS is involved in a large number of projects. Its primary mandate is to support the development of Francophone businesses in Saskatchewan.

(SILVIA KREUTZER – OWNER, OVER THE HILL ORCHARDS voiceover) An économusée  was a chance for us to tell our story. It was an opportunity to have all the programs in French for those who come to visit us. This gives several examples of what can be done for tourists in Saskatchewan. We started our program with the CÉCS in 2014. The CÉCS gave us the opportunity to be the first économusée in Saskatchewan.

(STÉPHANE RÉMILLARD – MANAGER, ENTREPRENEURIAL DEVELOPMENT, CÉCS voiceover) The relationship we developed with Over the Hill clearly began before I had my first contact with them, particularly through our recognition awards - Congratulations! –, and the SME Awards. In fact, we were really impressed by Sylvia and Dean's entrepreneurial abilities. It was also an opportunity for me to follow up because, in 2015, we were in the middle of a prospecting period to find artisans. With Over the Hill, we worked on many things. There was, of course, the development of a feasibility study at the start. That is one of the things we do in the development of an économusée.

(STÉPHANE RÉMILLARD – MANAGER, ENTREPRENEURIAL DEVELOPMENT, CÉCS) Obviously, as the project evolved, the feasibility study was adjusted somewhat. So, we always do the follow-up.

(Various shots of touring the operations)

(STÉPHANE RÉMILLARD – MANAGER, ENTREPRENEURIAL DEVELOPMENT, CÉCS voiceover) But there is also the entire accompaniment process, which is essentially the most important dimension in the development of an économusée, because we follow the approach of the artisans, and as they evolve in their process, we organize it so that all the development around it is done within an integrative framework. A business that offers services in both official languages is really part of the agreement we have with the Société du réseau des économusées. This is how économusées are developed across Canada.

(Various shots of Dean Kreutzer at the service of customers)

(DEAN KREUTZER – OWNER, OVER THE HILL ORCHARDS voiceover) It’s a very unique experience to come out here in the middle of Saskatchewan to have a chef’s supper overlooking the valley here and having an amazing supper and wine together and tours and all that.

So, it’s also a part of who we are and our history and it’s – again – a very unique experience for Saskatchewan.