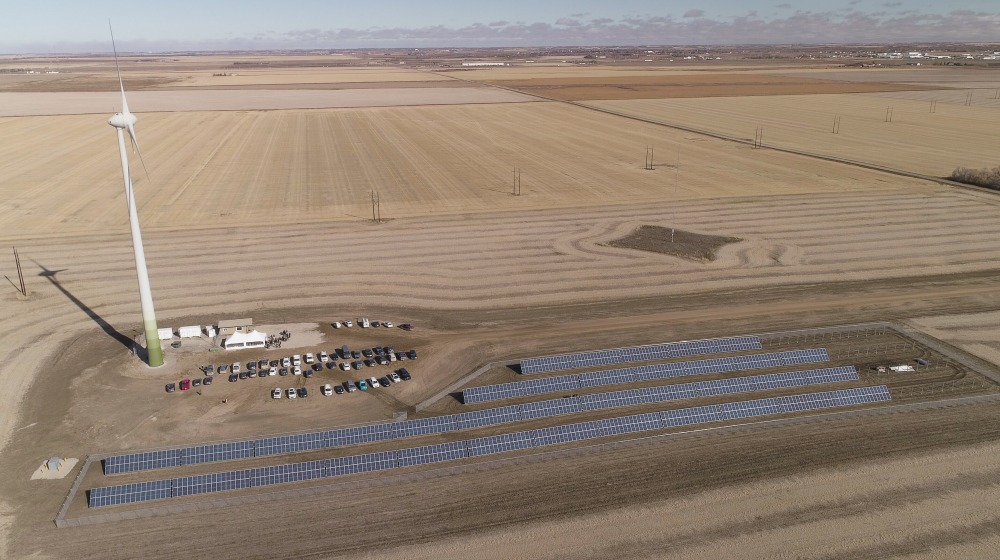 The Cowessess Renewable Energy Storage Facility is on reserve land southeast of Regina, Saskatchewan. It is the country’s first hybrid renewable energy system. It generates both solar and wind power, then stores it in batteries. WD provided $910,000 to buy and install over 1,100 solar panels.

The facility came online in 2013 as a joint venture of Cowessess First Nation and the Saskatchewan Research Council. The project began with an 800-kilowatt wind turbine and lithium-ion battery storage. The 400-kilowatt solar array was added in the fall of 2018. Fully integrated into the existing system, it was the largest solar project in the province at the time.

The facility can produce over 2,800 megawatt-hours of power per year. That’s enough to supply 340 homes. SaskPower signed a 20-year contract to buy the electricity from the project, with profits going to Cowessess First Nation.

The hybrid nature of the facility helps overcome the challenges faced by renewable energy systems.

The solar array generates power only when there is enough sunlight. Output from the wind turbine rises and falls with the amount of wind that is blowing. Both systems feed into the batteries, which smooth out the combined output. Electricity is stored when production is high, and used when the sun is not shining and the wind is calm.

This hybrid project shows how renewable energy can help build a sustainable future. It’s on the leading edge of solar technology in Canada. Saskatchewan is a great place to start and grow a clean technology company.