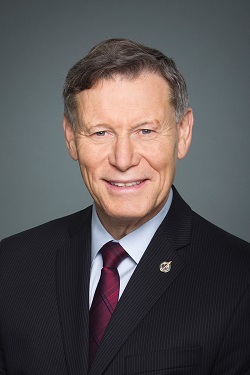 With a diverse background in civic government, business, and environmental leadership, Mr. Duguid has shown a strong commitment to public service throughout his career. In 1997, he founded Sustainable Developments International, a firm specializing in environmental management, sustainable development, transportation, and international affairs consulting. In 2000, he was named Chairman of the Manitoba Clean Environment Commission, and, in 2004, he became President and CEO of the International Centre for Infectious Diseases, a non-profit research organization he helped to create.

Mr. Duguid has a lifelong interest in science and its role in the betterment of society. He earned first-class honours while obtaining his Bachelor of Science degree in Biology, and holds a Master of Environmental Design degree focused on tackling the crucial issues of water quality, ozone depletion, and acid rain.

He and his wife Linda have two daughters.