This quarterly financial report should be read in conjunction with the Main Estimates. It has been prepared by management as required by section 65.1 of the Financial Administration Act and in the form and manner prescribed by the Treasury Board. This quarterly report has not been subject to an external audit or review.

This quarterly report has been prepared by management using an expenditure basis of accounting. The accompanying Statement of Authorities includes the department’s spending authorities granted by Parliament and those used by the department, consistent with the Main Estimates for fiscal year 2014–15. This quarterly report has been prepared using a special purpose financial reporting framework designed to meet financial information needs with respect to the use of spending authorities.

Total Authorities Available for Use and Planned Expenditures for the Year Ending March 31, 2015

Planned departmental spending is concentrated in transfer payments (74 percent) and personnel (18 percent). Combined, they account for 92 percent of total planned expenditures (refer to the fiscal year 2014–15 pie chart below). This planned spending pattern remains consistent when compared to fiscal year 2013–14 and it is expected to continue for the remainder of fiscal year 2014–15.

The department experienced an overall decrease in total funding available for use and planned expenditures to $158.9 million for fiscal year 2014–15, compared to $178.7 million for fiscal year 2013–14, as illustrated in the "Statement of Authorities" and "Departmental Budgetary Expenditures by Standard Object" tables. The net decrease of $19.8 million (11 percent) is due to: 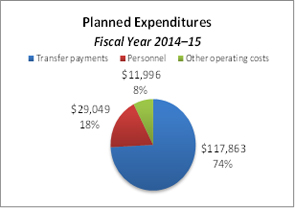 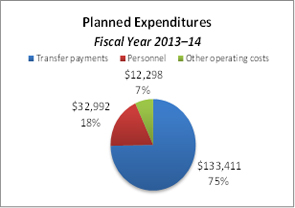 Total Authorities Used and Expended for the Quarter Ended June 30, 2014 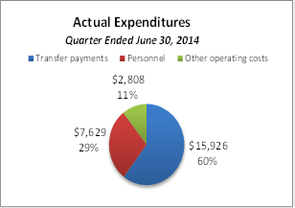 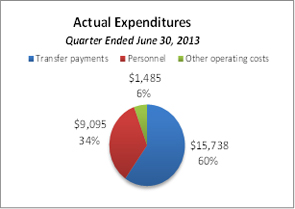 The department is managing the implementation of cost containment measures and strategic review savings within a well-defined framework of accountabilities, policies and procedures. It has the necessary system of budgets, reporting and other internal controls to manage within available resources and Parliamentary authorities. Proportionally reduced budget allocations to business and internal services units, supported by the regular review of staffing, and actual and forecast expenditure reports ensure resource utilization remains in line with financial and human resources planning, such that adjustments can be made on time.

The department maintains its financial management processes and it will continue to strengthen them, such that budget management remains effective. This includes assessing the impact of project timing fluctuations and the process for forecasting multi-year funding requirements. The decision-making process facilitates the re-allocation of financial resources to higher-priority initiatives.

Over the next five years, the Western Innovation (WINN) Initiative will provide up to $100 million in repayable assistance to western small- and medium-sized enterprises. The Honourable Michelle Rempel, Minister of State, announced support for 27 projects totaling over $21 million under the WINN Initiative on June 27, 2014.1 There was no incremental funding provided to WD to deliver the WINN Initiative.

This section provides an overview of the savings measures announced in Budget 2012 that are being implemented in order to refocus government and programs; make it easier for Canadians and businesses to deal with their government; and, modernize and reduce the back office.

The department will achieve cumulative savings of $16.3 million by fiscal year 2014–15 through efficiency measures and scaling back where the need is reduced; transforming how it works internally; and by consolidating and streamlining. The department had undertaken a review of internal services that has consolidated functions, notably procurement and accounting operations, to eliminate duplication and reduce operating costs. Other savings measures include: the transfer of the internal audit function to the Office of the Comptroller General; the adoption of a life cycle approach to the management of transfer payment projects; and various other managed expenditure reductions such as travel, professional services and transfer payments. With these changes, WD will focus on supporting management excellence and accountability across government.

The department has realized net savings in actual expenditures of $678 thousand for the first quarter of 2014–15. The balance of Budget 2012 savings will continue to be reflected through to fiscal year-end.

The department will continue to manage financial risks and uncertainties related to the anticipated costs of implementing personnel reduction measures in order to achieve the savings outlined in Budget 2012, the costs of which will vary depending on the timing of employee departures. WD continues to mitigate the implementation of Budget 2012 initiatives through financial management and monitoring processes that facilitate the re-allocation of resources, and financial and human resources planning.

There were no significant changes in relation to operations, personnel and programs for this reporting period related to Budget 2012 initiatives.