Located in the West, WD has offices in each of the four western provinces, with its headquarters in Edmonton. The department's presence in each western province has enabled it to work with key partners – other orders of government, community and business leaders, research and academic institutions, as well as non-profit organizations – to leverage its investments and actions to benefit the western economy.

WD’s in-depth understanding of western Canadian issues and perspectives, as well as its connections to and knowledge of Ottawa and the rest of the federal government, allow it to act as a bridge between the perspectives of the West and Canada's national policy and decision makers. WD brings Government of Canada programs and expertise to Western Canada, brings western Canadian interests to Ottawa, and works within the federal system to ensure that those perspectives are brought to bear in federal decision making.

WD works to improve the long-term economic competitiveness of the West and the quality of life of its citizens by supporting a wide range of initiatives targeting inter-related project activities – innovation, business development and community economic development. These programs and services are supported by WD's policy, advocacy and coordination activities. Together, these priorities create a foundation to build the prosperity and competitiveness of the West in the 21st century.

WD’s strategic investments in these areas will help to fulfill its vision:

"To be leaders in creating a more diversified western Canadian economy that has strong, competitive and innovative businesses and communities."

Western Economic Diversification Canada (WD) is committed to both the spirit and the intent of the Access to Information Act (R.S. 1985, c. A–1), which came into force on July 1, 1983, to ensure openness and transparency within the department.

The Act provides all Canadian citizens or permanent residents with a right of access to any record under the control of a government institution, with some specific and limited exceptions.

This report summarizes WD’s implementation of the Access to Information Act and fulfills the requirements under Section 72, which stipulates that "The head of every government institution shall prepare for submission to Parliament an annual report on the administration of this Act with the institution during each financial year" and ensure it is tabled in Parliament.

WD will publish its Annual Report to Parliament on its public web site (www.wd-deo.gc.ca) once it has been tabled in the House of Commons and Senate.

Administration of The Act

Western Economic Diversification Canada’s (WD) Access to Information and Privacy (ATIP) Unit is located in Edmonton, Alberta. The unit oversees the administration of the Act, and is part of the Finance and Corporate Management Directorate. The ATIP Coordinator (Executive Director, Finance and Corporate Management) is supported by the Deputy Access to Information and Privacy Coordinator (Manager, Corporate Administration), and one full-time ATIP Officer. In addition, a back-up was identified for the ATIP Officer in March 2012.

These individuals are accountable for the development, coordination and implementation of effective policies, guidelines, systems and procedures to ensure the Minister’s responsibilities under the Act are met, and enabling the appropriate processing and proper disclosure of information.

Regional ATIP Liaison Officers (RALOs) are located in each of WD’s regional offices and corporate business units. These seven individuals are the first point of contact and identify the appropriate subject matter experts, coordinate retrieval of records responding to access requests, and liaise between the ATIP Unit and regional staff concerning enquiries.

The primary activities of WD’s ATIP Unit include:

The ATIP Unit utilizes an ATIP database management system for all administrative actions; however, it processes all records in paper format, except where lists are compiled into Excel format and provided to the applicant electronically. WD does not utilize an electronic redaction system for processing its records at this time.

For the purposes of the Access to Information Act for WD, the Minister of Public Works and Government Services Canada, Minister for Status of Women and Minister responsible for Western Economic Diversification delegated her full powers, authorities and responsibilities to the Executive Director, Finance and Corporate Management (ATIP Coordinator) and Manager, Corporate Administration (Deputy ATIP). The delegation also extends limited authority to the ATIP Officer to acknowledge access requests and manage related extensions.

A copy of the signed delegation instrument for the Access to Information Act is attached in Annex A.

WD’s Access to Information policy suite, including the Access to Information Procedures Manual, underwent significant updates in fiscal year 2010–2011. These policy and procedural documents are reviewed annually to ensure that they are up-to-date, and incorporate any changes in TBS policies or directives, or changes as result of issues raised by the Office of the Information Commission or other agents of Parliament. As these documents had been recently revised, no changes were made in the 2011–2012 fiscal year.

However, as a result of TBS guidance received in July 2011 pertaining to posting of summaries of completed access requests on the public Web sites of federal institutions, WD began posting summaries of its closed access to information requests in September 2011. This requirement became mandatory in the revised TBS Directive on the Administration of the Access to Information Act (January 16, 2012). In addition, a new hyperlink was added to the home page on WD’s Web site above the hyperlink to "Proactive Disclosure" and the postings are also hyperlinked to the Open Government Web site.

In March 2012, the ATIP Officer successfully met all the requirements for professional certification from the Canadian Institute of Access and Privacy Professional (CIAPP) and was granted the designation of CIAPP Professional.

A back-up for the ATIP Officer was identified in mid-March 2012. Limited training was provided in fiscal year 2011–2012.

Several departmental managers use these tips as discussion items in staff meetings. They are also shared with ATIP officials in several federal institutions, including the regional development agencies, the Canadian Space Agency, National Research Council of Canada, the Canada School of Public Service, and other small departments and agencies that are part of the Small Agency Administrator’s Network.

The following information provides additional context where appropriate to the statistical details found in Annex B – "2011–2012 Report on the Access to Information Act (Statistical Report)".

In 2011–2012, WD received 11 requests for information pursuant to the Access to Information Act. This is a 39 percent decrease from the last two fiscal years. In addition, WD received two requests which were treated informally as a result of the posting of summaries of closed access requests. 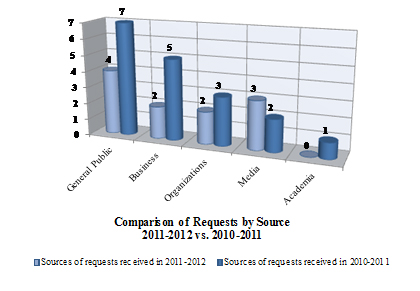 B.  Extensions of Time Limits and Consultations

In 2011–2012, WD required extensions to complete necessary consultations on two requests. Although extensions of 45 and 60 days were taken, WD closed both requests within 45 days thanks to the prompt responses from the third parties and other government departments that were consulted.

Sections 20(1) and 21(1) of the Act were the most utilized exemption during the reporting period, each having been applied to two requests. Section 26 was applied to one request, but information subsequently released.

Of the seven access requests completed during the reporting period, four were disclosed electronically in their entirety and three were disclosed in part and the records provided in a paper format. Four requests were carried forward to the 2012–2013 fiscal year.

Of the requests carried forward, two requests required clarification and/or application fees, one required reproduction fees, and one awaited the response to a consultation with another federal department (a preliminary response and a portion of the records had been provided to the requestor).

WD received no complaints pursuant to the Access to Information Act in 2011–2012, and there were no appeals or applications submitted to the Federal Court.

G.  Fees and Operational Costs Associated with Administering the Act

Access to Information fees collected during the reporting period totalled $78.80. These fees include application fees for 10 requests and $23.80 for reproduction costs. During the same period, WD waived fees totalling $32.80, including reproduction fees of $27.80, as well as a $5.00 application fee refund. (Note: The reproduction fees, both fees collected and waived, reported here are the actual fees; fees reported in the Statistical Report are rounded up due to reporting limitations of the report.)

WD’s cost for administrating the Access to Information Act is estimated as follows:

The additional costs included above, which are not all captured in the Statistical Report, provide a more complete picture of the overall cost to the department to administer all aspects of its activities related to the Access to Information Act. While the salary costs increased slightly, the total estimated costs to administer the Act of $85,301decreased slightly from 2010–2011 due to reduced administrative operation and maintenance costs and other salary-related costs. 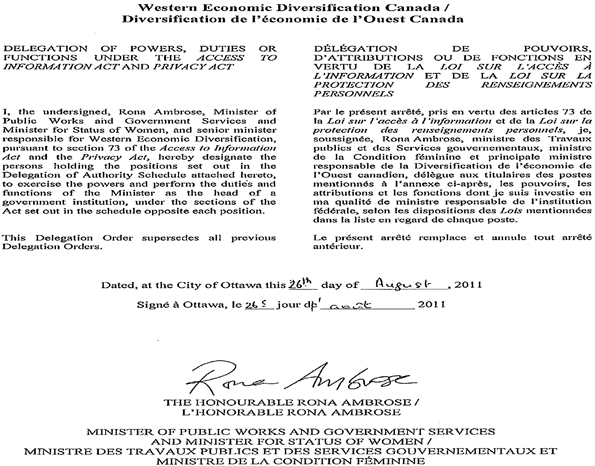 Part 5 – Consultations received from the other institutions and organizations

5.1  Consultations received from other government institutions and organizations

5.2  Recommendations and completion time for consultations received from other government institutions

Part 7 – Resources related to the Access to Information Act